The Online Scams, Lies, and Fakers you Believe… Until Now

I’m so annoyed with all the scams, stretched truths, and just straight up bullsh*t so many people believe about getting media exposure.

I touched on this during my talk at the Mom 2.0 Summit in Austin, Texas and wanted to bring it to the podcast because there is a big difference between a journalist, a blogger, an influencer, and a publicist.

Today, too many are using these titles interchangeably while behaving unethically and breaking the law.

There are four big issues I touch on in this episode:

I was prompted to record this episode after hearing way too many stories from people who fell for scams, stretched truths, and straight up bullsh*t because it looked and sounded good. 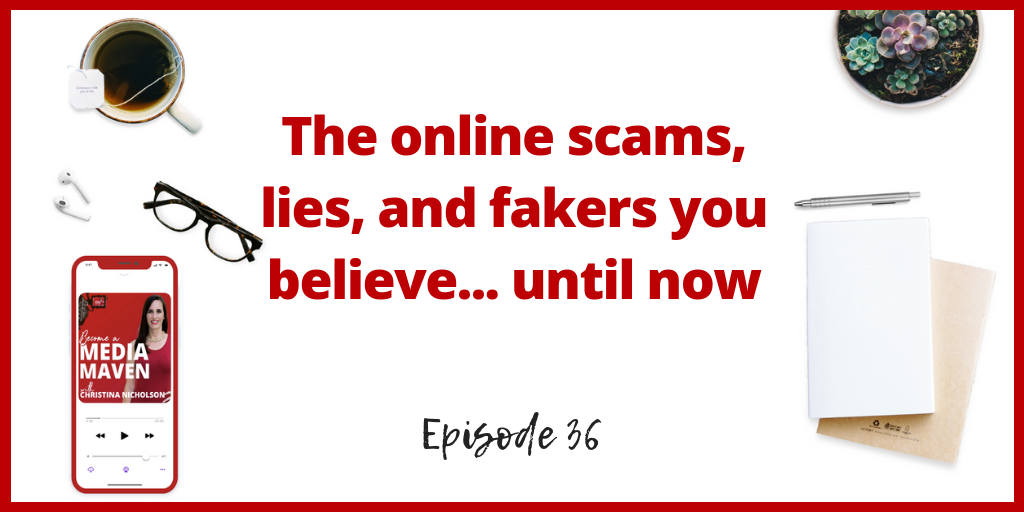 I am super excited for this episode because I’m this episode I am going to dish on the scams, the stretched truths that you’re believing and the straight up bullshit that you believe about earning media exposure because I know you’re reading a lot of stuff online. I know you’re spending money on some of this stuff and you are being very disappointed, so I’m going to break it all down here.

The Online Scams, Lies, and Fakers you Believe… Until Now

I am just back from Austin, Texas where I spoke at the Mom 2.0 Summit and right before I left for Texas I added a few things to my presentation because some things were brought to my attention more recently and a lot of it has to do with this wild shit that y’all are seeing online and you are believing… and part of me is upset that you guys are just so silly to fall for this kind of marketing.

But then the other part of me has to understand that you don’t have media backgrounds so you don’t know that maybe it’s too good to be true.

So I’m going to talk about four scams, stretched truths, are just straight up bullshit that is being peddled out there online today. You may even be targeted with a Facebook ad with this stuff today and I’m just going to break down why it’s not real.

From a media perspective, from a journalism perspective, there are a few different ways I’m finding out about this. Most of the time it’s people sending them to me.

The latest was literally yesterday, somebody sent me a link and said, ‘is this legit?’ That’s going to be my number four that I get to, but first…

By law, you need to disclose if coverage is paid for because then it’s not editorial, it’s not earned media. Then it is an advertisement and that has to be disclosed legally.

I know many, many people who call them bloggers, call them influencers, whatever the hell you want. They will do these TV segments as I do, but the big difference between me and a lot of them is that they are charging brands to be in a roundup on TV and they’re not telling anybody at the TV station about it.

I know people who have been a victim of this and I know of people who have contributed to online outlets as I contribute to Inc. magazine or Fast Company, and they will charge people for quotes and these outlets.

I had a woman join my Media Mentoring Program a month or so ago and this was after she paid somebody $4,000 to be featured in Forbes and I said, ‘who in God’s name are you paying that amount of money for a Forbes feature?’ And she said, ‘oh, well there’s this company and they collect the money and you kind of write something and they send it to the contributor and the contributor publishes it’. And I said, ‘and how’s that working out for you?’ And she said, ‘I spent $4,000 and I haven’t seen myself in Forbes yet’.

And she was supposed to get one other media hit in a magazine… that didn’t happen. The magazine had a similar name to another magazine that nobody read. And the company that was the middleman or the contributor, who was an idiot, got the magazine wrong and this person ended up paying for coverage in something nobody reads when she thought she was paying for coverage in something that a lot of people read.

This is another example of why you cannot charge brands or people because you don’t know what the hell you’re doing. You don’t sell advertising. You’re not a salesperson and you’re breaking the law.

I hope that this helps you understand that you, as somebody who wants media coverage, you cannot be paying people for it. I just gave you a perfect example of somebody who is in my Media Mentoring Program who paid for coverage that she did not receive and that is because she was paying somebody who was not in the position to deliver because they didn’t work at that outlet. They didn’t control what went in that outlet. They were just a contributor.

When I write something for Inc. magazine an editor looks at it, and many times I’ve written things and he said, ‘oh, I don’t like this quote. I don’t know if this person’s a true expert, we’re removing them or we’re going to remove this backlink because it doesn’t link back to something that is relevant to what’s being said or we’re not linking back to home pages because it’s too promotional’.

Another example – I was doing a TV segment and the producer was not keen on a couple of items that I was showing and the names of the items and me talking about them during the segment so I had to speak very generically about it and it was not something that the brand would have wanted. But again, I can’t control what goes on their air. If a producer doesn’t want me to say something then I’m not going to go in there and say it and ruin my relationship with the producer and the TV.

So the moral of this, is that if you are paying for coverage, you are buying an advertisement. If you are going to pay for coverage, buy an ad, then you need to be sure that you are paying somebody who is an employee of that outlet and is authorized to sell advertising because until then it’s like you’re pulling up on public property and there’s a homeless man collecting money selling you a parking spot. Why the hell would you pay the homeless man? You can park there anyway. He’s taking your money and he’s got no right to do so because he doesn’t own the land.

Those are the stupid things that people are doing online because they don’t know any better. And now you know better. So tell your friends.

Well, there’s a couple of ways.