Monica Louie is my go-to Facebook ads expert. After hiring multiple people to run my ads, she is the real deal. Trust me.

In this episode, Monica is going to break down the three biggest mistakes most people make when they start running Facebook ads.

She’s also going to walk you through the six things you need to do to set up your first, successful Facebook ad campaign… and she’s taking you step by step.

Make sure you sign up to join Monica and me for her masterclass at MoniceLouie.com/Christina. 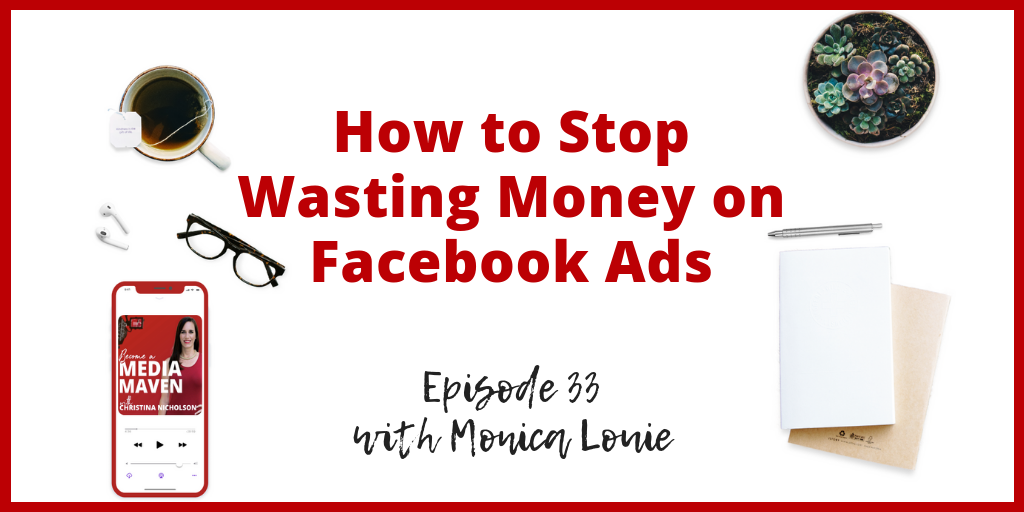 In the industry, a lot of people will hire people to run Facebook ads for them or they think it is a matter of knowing which buttons to click when really, my team and I pride ourselves are looking at the overall strategy.

What is the client’s end goal?

What are we trying to do with the Facebook ads?

What are we get trying to get people into a funnel?

Are we trying to get people to click over through a monetize blog post to increase affiliate commissions? What are we really trying to do here?

Are we just trying to get the name out there to build brand awareness?

We look at what the client is really ultimately trying to achieve and then how we can use Facebook ads and other strategies as well too to make that happen. That’s why it’s really important to understand more about the client.

The first mistake I see people make when it comes to getting started with Facebook ads is that there is a lack of commitment.

And this is really important. We know as business owners we need to be committed to seeing a process through seeing a strategy through. We need to give it enough time in order to work. The same goes for your Facebook ad strategy.

So, my clients who are the most successful are the ones who are committed to figuring out a Facebook strategy that works for them to help achieve their goals and they also stick with it until they figure it out until we figure it out together.

But secondly, it does take some time. It takes some testing and it takes some time to give the algorithm time to understand and learn from the data that it’s being fed and that it’s learning as the ads are live… and who is interacting with it to help you get the best results.

So lack of commitment is the first biggest mistake because a lot of times people don’t understand how long to give the algorithm, so they think that if they’re not seeing results within a few hours, that they’re just wasting their money and tend to turn things off and try something else, but really it takes at least three to four days for the algorithm to learn who is engaging with the Facebook ad, what types of people it should show the ad to within the audiences that you select.

Over time, we see that usually cuts costs, we’ll start high and then they’ll drop as days go on and the algorithm just gets smarter over time. So really being committed and then also understanding that testing is part of the process.

We don’t always hit it out of the park the first time, and so it does take some learning too and adjusting to get those great results.

The second biggest mistake is a lack of strategy.

So just being really clear on why you are using Facebook ads and what is the end goal, and then, how can Facebook ads be a part of that strategy.

People think if they learn Facebook ads, that’s going to be the magic button solution. Then once I figured out the Facebook ad piece, then everything else is just going to fall into place.

But really you’ve got to have a comprehensive strategy and Facebook ads. As much as I love them, they’re not the golden ticket to success. They’re just a piece of the puzzle, but the strategy has to be in place.

I’ll say here too that boosting posts is not a strategy.

I feel like boosting posts is Facebook’s low hanging fruit. Facebook has made it super easy and they’re so kind to remind you to “this post is performing 85% better than all of your other posts on your page” so of course, don’t you want to put some money behind it? But that money adds up.

I would rather you save that money unless it really is something that you really, really, really want to get more eyes on. But usually just posting something on your page it’s not going to lead to our bigger overarching goal.

I would recommend saving that boosted post money that you would’ve spent there and put it together with a full budget to use toward a Facebook ad campaign and then you can think more strategically because when you’re boosting posts, you have fewer options.

There’s also a lack of testing and we know that testing is super important to get those great results. So, just make sure that you are going in with a set dollar amount that you want to invest in Facebook ads and you’re creating a comprehensive strategy to help you achieve your most important goals.

The third biggest mistake is a lack of education.

It’s important as business owners, as entrepreneurs, to be action takers. We’ve got to dive in and take action and get stuff done. Otherwise, we’re not going to see results.

If we just dive in and try and figure out what all those options and buttons mean on our own without really understanding the process and, and putting it together with that strategy, then that’s where people don’t get the results that they’re looking for that and then they can end up giving up too quickly and having that lack of commitment.

For more on the six steps to creating campaigns that convert make sure you click here to listen to the full podcast episode with Monica Louie.