Besides declaring the wrong woman Miss Universe, I don’t put the blame on Steve Harvey, even though he takes it. From a professional stand point, this is why.

No matter how used to it you are, things happen. It’s why a lot of things are taped. I’ve done live TV hundreds of times. Once, I forgot my name. Another time, I forgot my sig out – the thing you say at the end of EVERY SINGLE live shot. We all have brain farts. We all make mistakes at work. For most people, they don’t happen in front of millions. For a few, they do… and then people attack. “How hard is it to read a card?” Well, sometimes it is hard. You’ve never misspoke while reading something? 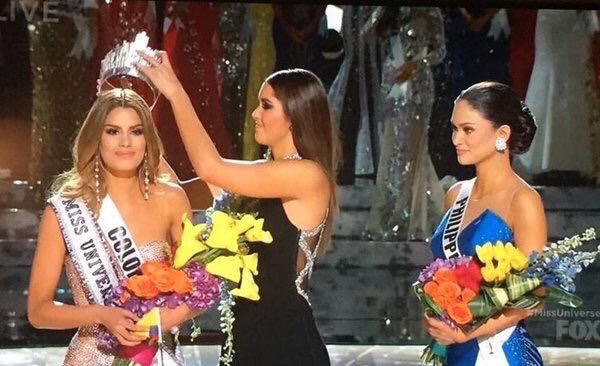 It’s not a solo act.

Yes, he was the only host, but where was the Miss Universe organization? Hosting a live event with changing elements, like a beauty pageant, can’t be easy. Instead of just handing him a card, he should have been told who won. He should have been handed the card and told, this is the second runner up… this is the first runner up… this is Miss Universe. I do not think he was prepped, just handed a card… with very small font.

After the universal mistake, thousands (if not millions) took to Twitter. I think Steve Harvey broke Twitter that Sunday night. His first apology tweet had a couple of spelling mistakes. It was not a good time for this, considering what was misspelled. But I’m willing to bet Steve Harvey did not tweet this. Tweets were posted from his account all night. I don’t think he was hosting live and tweeting at the same time. He has a social media team… and I bet someone on that team was rushing to put something out in the Twitterverse ASAP and got lazy. I’ve said it before… this is why you cannot hire an intern to manage your social media accounts! Then, that tweet was deleted. (Note: DO NOT delete social media posts after tens of thousands of people share it.) 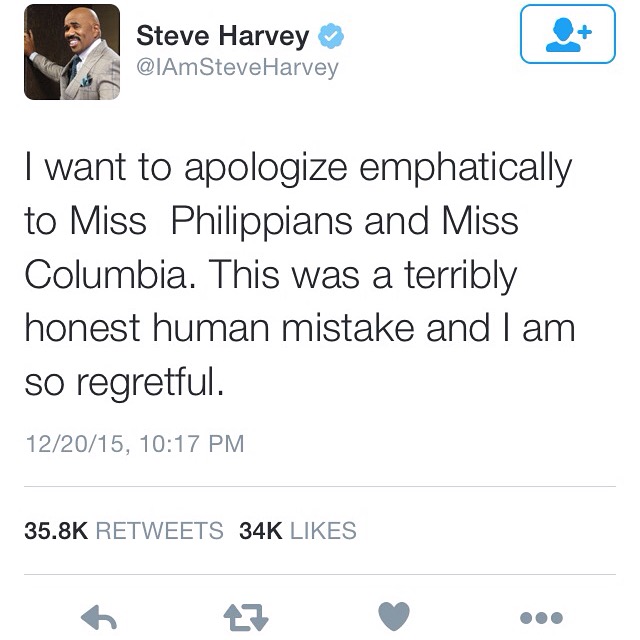 Remember, Steve Harvey didn’t single handedly pick the winner and change his mind. Other people voted. He was the messenger. He didn’t take the crown from Miss Colombia. Miss Philippines had it all along (and rightfully so, in my opinion.) The saying “don’t kill the messenger” rings true in this circumstance. 100%.

I’m not going to say “it’s just a beauty pageant” because some women work their entire lives for this one night. But, let’s remember what some of these women talked about during their final question… gun violence, terrorism, etc. So yes, while it is an important night for many women, there are bigger fish to fry.

Miss Colombia shouldn’t be upset this happened. She should be thrilled! If Steve would’ve announced the correct winner as planned, no one would be talking about Miss Colombia today. They may have said, oh that contestant looked like Sofia Vergara… and that’s it. It’s like the girl from Miss Teen USA who thought we needed more maps in the world. She was better known than the girl who won Miss Teen USA! No one will forget the runner up this year! Plus, I bet Miss Philippines appreciates her win a little more now, after being a runner up first.

Do I think this is publicity stunt? No way! Whenever something big or unexpected happens, people who don’t know any better scream publicity stunt. I don’t think Steve Harvey wants this kind of publicity. In addition, I don’t think he needs it with a radio show, daytime TV show, Family Feud, best selling books, etc. If you want to see him explain what happened himself, click here. How can you not love a man like that?!