Creating an eCommerce Conversion Funnel with your Brand

Yes, you can create an eCommerce conversion funnel to sell more products and you can do it all with your brand.

Scott Voelker has helped many build brands on Amazon to increase their sales.

In this podcast episode, Scott takes us through how to use your brand to build an audience and use that attention as currency to success online. 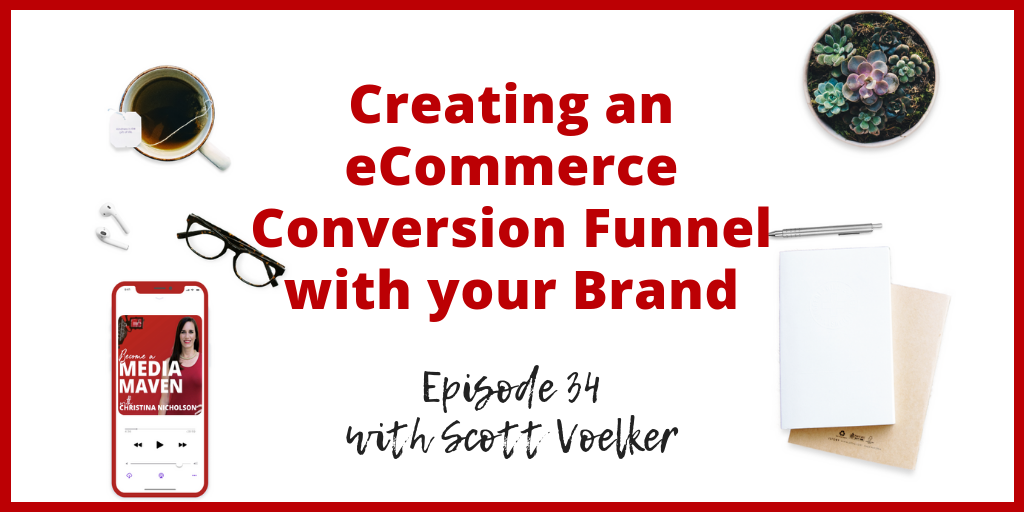 Creating an eCommerce Conversion Funnel with your Brand

I started hearing a little bit about online stuff and I started dabbling in EBay and selling some stuff on EBay.

Now at the time, we had a photography business, but I also had people that would say, do you transfer old movies and stuff? And I’m like, no. And I’m like, maybe I should.

We ended up starting a side business on top of our photography business for doing these on video transfers and we turned that into additional revenue coming into the business.

Everything that I do today, like Amazon, I’m known for now. But really, everything that I’ve learned up to this point has helped me on Amazon and off of Amazon. I’m just known for the Amazon thing and we can talk about the podcast and how that all started, but I’m really just trying to fill in the blanks for people to understand that you don’t just wake up one day and go, “I’m going to be the expert in this thing”. Right?

There’s like different twists and turns that are going to happen and there are probably things you’ve already done that have educated you in certain areas that you can really start to dig a little bit deeper into and maybe that’s your start. Maybe that’s your thing.

There’s a lot of things that I learned going through that process to help me get to where I am now.

To add a little bit to that, before the projectors, I tested out EBay because I was always dabbling in stuff – a couple of things that we had laying around the house and we’re like, “Oh, here are people selling things like garage sale stuff like on EBay. Let’s try it.” So we did and we sold this stuff.

This is before retail arbitrage became a thing.

Have you ever heard of the Christmas tree shop? It might be a northern thing, but it’s a large chain that they have in upstate New York. It’s a big store and they have a lot of just random stuff.

My wife found me bridges there and they were $30. We’re looking on EBay and there’s the same exact bridge – the garden bridge. It would just go on your garden.

To take $3,000 and put it on a credit card to buy all these cedar bridges, you’re like, ‘oh my gosh, this is a big risk’. But we did it and we knew if we didn’t sell them, we could always probably bring some back, but our whole goal was to make enough money to pay for our children’s tuition. (We sent them to a private school. At the time we didn’t have really good schools in our area, so that would help cover some of the tuition.)

Another funny little side story – competition comes in. People are seeing what we were doing and then they start knocking you down as far as price. So everybody’s now getting only $75 a bridge.

Well, how can I be different? I’ll offer colors cause these were just like a plain wood. I said, oh, I’ll stain them and then I’ll give people three choices of colors. So then I took them all out of the boxes.

Moving from EBay to Amazon

We did a lot of crazy stuff like that, but we always made money. We might not have made as much money in certain things, but we still found a way to make some money.

Once online stuff happening, that’s when my eyes just went boom, like wide open. I’m like, how can I replicate this?

To hear more on how Scott transitioned from EBay to Amazon and how he helps people rank at the top, click here to listen to the full podcast.